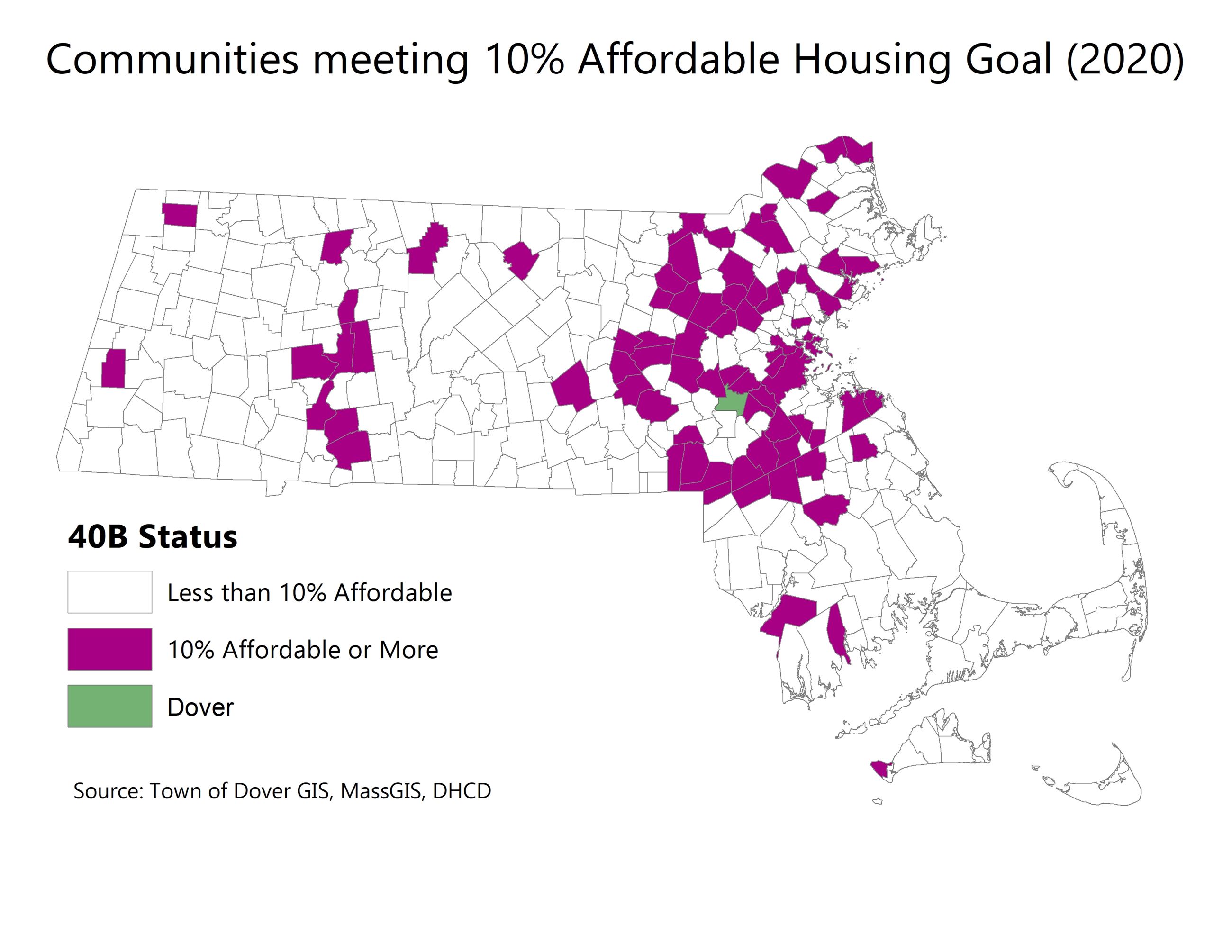 Ch. 40b is Massachusetts law went into effect in 1969 (widely known as the “Comprehensive Permit” law or “Chapter 40B”) that establishes a mandate for all communities in Massachusetts to have a minimum of 10 percent of their housing stock be affordable to middle- and lower- income households. To count toward this 10 percent, affordable housing units must have a permanent or long-term restriction requiring the unit to be sold or rented to households earning less than 80 percent of the median income in the local area (Area Median Income or AMI). The 10 percent minimum is based on the total number of year-round housing units reported in the most recent decennial census; for Dover, this currently means that 195 units out of a total of 1,950 must be deed restricted as “affordable” (Census 2010). It is expected once the 2020 decennial census data is released this number will rise to approximately 213 housing units. The state tracks the units on what is known as the Subsidized Housing Inventory (SHI). Dover's current status is 0.9% affordable.

The intent of Chapter 40B is to provide a fair-share distribution of affordable housing throughout the Commonwealth. In order to address zoning and permitting barriers that make it too expensive to build low- and moderate-income housing, Chapter 40B supersedes zoning and other local regulations. M.G.L. c. 40B, Sections 20-23 authorizes the Zoning Board of Appeals to grant a comprehensive permit to qualified affordable housing developers. A comprehensive permit is a single permit that replaces the approvals otherwise required from separate city or town permitting authorities. The Zoning Board of Appeals may approve, conditionally approve, or deny a comprehensive permit, but in communities that do not meet the 10 percent minimum, developers may appeal to the state Housing Appeals Committee (HAC). Although comprehensive permits may still be granted after a town achieves the 10 percent minimum, the HAC no longer has authority to overturn a local board's decision. 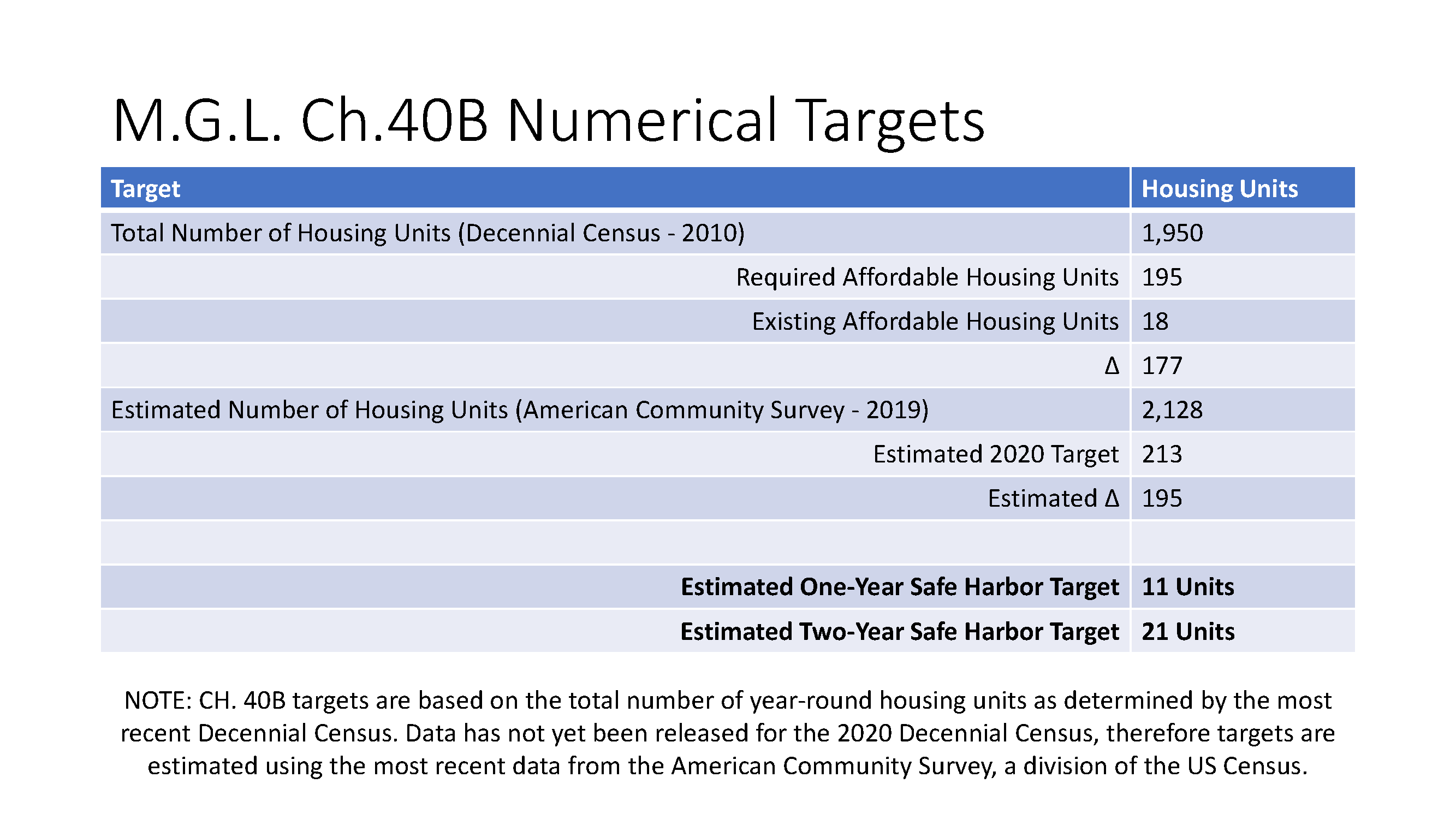 Dover currently has 18 units of affordable housing listed on the Subsidized Housing Inventory, which will increase to 23 units when the next SHI is published (several units were constructed that were not listed - this has been corrected). All 23 units are ownership units rather than rental units. Comprehensive permits issued for rental developments allow the town to count every unit in the development on the SHI, while only affordable ownership units within ownership developments are counted on the SHI. This is to incentivize the production of rental housing.

The Planning Board is currently in the process of preparing a Housing Production Plan (HPP). The HPP guides local affordable housing policy to meet the housing production targets in the table above. Once the HPP is approved by the Planning Board and Board of Selectmen, it is sent to the Department of Housing and Community Development (DHCD) for certification. Once Certified, the town has the ability to obtain "Safe Harbor" if it approves 11 units of affordable housing eligible for inclusion on the SHI for a one-year time period. If the town approves 21 eligible units, the town may obtain "Safe Harbor" for two-years. When a community is in "Safe Harbor", the Zoning Board of Appeals has the ability to deny unwanted 40b projects.